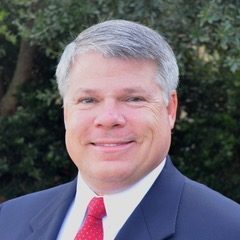 Michael Faulkner of Fayetteville is serving as the 2018 President of the Georgia REALTORS®. Michael is a member of the Fayette County Board of REALTORS® (FCBR), and is the Broker/Owner of Faulkner Commercial Group, which specializes in commercial sales, leasing, property management, consulting, construction management, and development, serving the Metro Atlanta area.

Michael has been a dedicated REALTOR® association volunteer for more than 30 years. At the local level, he has served on numerous committees, including Budget and Finance, Professional Standards, Nominating, and Executive. He was elected to serve as FCBR President in 2002, and in 2015, was named FCBR REALTOR® of the Year. Additionally, Michael has qualified multiple times for FCBR’s Circle of Excellence, earning the Phoenix Award in 2007.

At the state level, Michael has a well-rounded resume of committee service, including Forms, Legal Action, Broker’s Council, and State and Local Governmental Affairs, among others. He also served as a Trustee for both the REALTORS® Political Action Committee (RPAC) and the REALTORS® Political Involvement Committee (RPIC), and was a Regional Director for GAR’s Region 4 as well as a Vice President for four years.  At the national level, Michael has served as a Federal Political Coordinator (FPC) for Georgia’s 3rd District from 2002-2010. As an FPC, Michael served on a Training Task Force that created the FPC training program for NAR. Most recently, he served as a Federal Senate Coordinator Alternate for Senator Saxby Chambliss (2013-2014), and for Senator David Perdue (2015-2016). Additionally, Michael was appointed as a member of NAR’s Commercial Committee in 2016, and he currently serves as the representative for Georgia on NAR’s Major Investors Council.

Michael is also a tireless volunteer for civic activities. In his community, he has been involved with the Fayette County Chamber of Commerce, the Downtown Fayetteville Development Authority, Mainstreet Fayetteville, Fayette Senior Services, and the Metro Fayetteville Kiwanis Club.

Michael attended Georgia Tech and Georgia State University, where he earned a Bachelor’s degree in Industrial Management and Business Administration. He lives in Fayetteville and is the father of two children, Jacqueline and Thomas, who keep him busy at the athletic fields on the weekends coaching their sports teams.