At age 19, Amy Purdy contracted Neisseria meningitis, a form of bacterial meningitis.[1]The disease affected her circulatory system when the infection led to septic shock;[2] both of her legs had to be amputated below the knee, she lost both kidneys,[3] and her spleenhad to be removed.[1] Sepsis is when an infection causes an inflammatory response, leading to organ failure or clinical shock,[4] and is a common cause of death. In Purdy’s case, she went into septic shock in less than 24 hours of getting sick. Doctors gave Purdy only a 2% chance to survive since her sepsis was so advanced.[5] Two years later, she received a kidney transplant from her father.[1]

In 2003, Purdy was recruited by the CAF as spokesperson, and she moved to San Diegoto be closer to the CAF headquarters. In San Diego, she continued her pre-amputee profession as a massage therapist. She also became involved in the modeling and acting industry. In February 2003, she played a model in a Madonna music video.[1] Later in 2003, Purdy started working for Freedom Innovations, a prosthetic feet manufacturer, as its “Amputee Advocate”.

She has gone on to co-found her own non-profit organization, Adaptive Action Sports,[6] a chapter of Disabled Sports USA[7] for individuals with physical disabilities who want to get involved in action sports (snowboarding, skateboarding, surfing) or art and music.[1][8]

In 2005, Purdy made her film debut in What’s Bugging Seth, a movie by Eli Steele. In May 2011, Purdy was also featured in a well-regarded TED video entitled “Living Beyond Limits.”[9] Other videos to watch about her background also can be found on the internet.[10][11] In 2014 she was named one of ESPNW’s Impact 25.[12]

In 2012, Purdy and her then partner Daniel Gale[13] participated on the 21st season of The Amazing Race. They were the second team eliminated and finished in 10th place out of 11 teams.[14]

On February 5, 2014, Purdy was in a one-hour special on NBC television titled How to Raise an Olympian. The program, hosted byMeredith Vieira, chronicled the journeys of seven U.S. Olympians and included interviews with parents and coaches along with home video and photos from each athlete’s childhood. Purdy went on to win the bronze medal in Snowboard Cross in the 2014 Winter Paralympics.

In 2015, Purdy was featured in a Super Bowl ad for the Toyota Camry. The ad features Purdy snowboarding, dancing, and adjusting her prosthetic legs with a voiceover of Muhammad Ali’s “How Great I Am” speech.[16] Reviews questioned the efficacy of the ad; “It’s really an ad about how amazing Amy Purdy is versus how amazing the new Camry is”, said advertising professional Megan Hartman.[16][17] On February 22, 2015, Purdy drove the Toyota Camry pace car in the 57th running of the Daytona 500.

On December 30, 2014, Purdy released a memoir entitled On My Own Two Feet: From Losing My Legs To Learning The Dance Of Life, published by HarperCollins.

Purdy is considered one of the most commercially successful Paralympic/adaptive athletes in the world. Purdy has existing marketing partnerships/endorsements agreements with Toyota, Pfizer, The Hartford, Element, Freedom Innovations and has had previous relationships with Kelloggs and Coca-Cola. Purdy is represented by the Chicago-based firm Chicago Sports & Entertainment Partners. 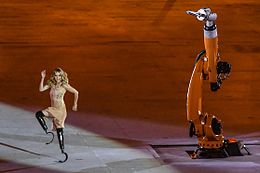 Purdy was a contestant on season 18 of Dancing with the Stars. Paired with five-time championDerek Hough, Purdy was the first double amputee contestant to ever appear on the show.[18]Hough was, at the time, fresh from winning his fifth Mirrorball trophy and did not plan on coming back to the show. However, he changed his mind when Purdy joined the show as a contestant.

During the show Purdy was repeatedly praised for her fast learning skills, immense natural dancing ability, incredible endurance and passion and for being a role model. Despite having no legs, she never received any score lower than an 8. She received her first perfect score (40 out of 40) for her eighth dance, the Argentine tango, despite dancing it after having an intense back injury the week prior. Purdy went on to receive two more perfect scores later on, though she also came close to a perfect score in four other dances where she received almost-perfect scores (29 out of 30 or 39 out of 40).

Purdy was consistently deemed safe to advance to the week after, and she made it all the way to the finale with Olympic ice dancer Gold medalist Meryl Davis and actress Candace Cameron-Bure. Purdy eventually finished as a runner-up to Davis, and Bure took third place. In her appearance on the show, Purdy broke several records: she was the first double amputee contestant on the show and joined the list of few contestants to never receive any score lower than an 8 from the judges. Her performance average of 27.9 out of 30 is among the top ten of the highest ever on the show’s history (with Davis’ 28.4 average being the highest ever).